“Every now and then a man’s mind is stretched by a new idea or sensation, and never shrinks back to its former dimensions.”

-Be on-site as much as your schedule allows during the initial phases, such as staking out the house, excavation of the basement/crawlspace, and cutting of the driveway as some decisions might have to be made quickly.

-Take photos and videos of all phases/steps. These will be great for future memories and helpful if you need to remember how the drainage is laid out, etc.

-BREATHE DEEP! The first phases will have its fair share of frustration, but remember it’ll all be worth it in the end. Trust in the process.

Michelle and I had finished all of the final steps in order to be ready to break ground. We closed our on construction loan with the bank, filled out the proper paperwork with Rush-Shelby Energy to allow the installation of our temporary electric pole/meter, and continued the process of touring different home and talking with vendors so we wouldn’t be rushed to make a decision when the time came. Keith finalized everything he needed on his end. He pulled our septic, driveway, and building permit with Shelby County. We met at the lot to install the temporary meter base and he made sure his contractors were ready for our anticipated timeline. Who would have thought that seeing something as simple as temporary electric being installed would be exciting? To us, it meant that we were finally ready to begin. The look of our lot would be changing quickly. 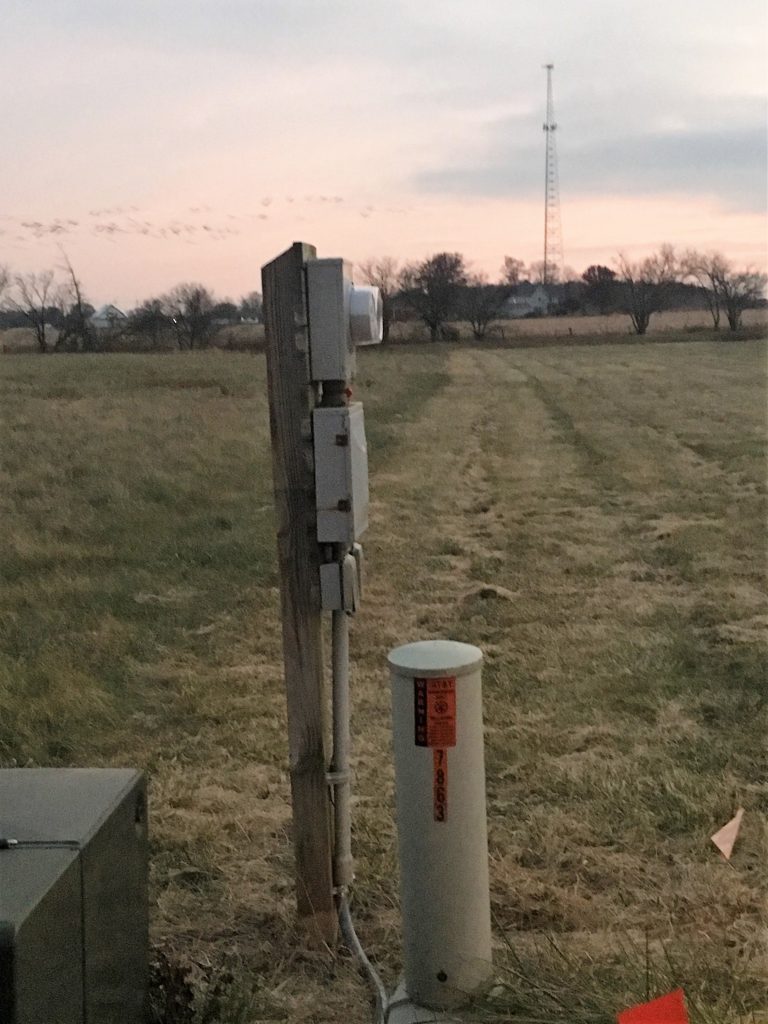 Last Monday, Michelle and I (and the boys) started out last week excited to finally begin the building process. It seemed like we had been in the planning phases forever. I met Keith at the lot on Monday to “lay-out” the house. We decided to move the location of the house 10′ to the east from where we originally planned.  Moving the house 10′ feet would give us more room between the driveway and the property line. Using the measurements on the plans and an additional drawing with Keith’s figures, we set a pin for the front corner of the house. We then pulled measurements marking all the corners of the house, porches, garages, etc. and made sure everything was all square.   After we were satisfied with the location of the stakes/house, we then marked 3′ over-dig lines. To do this, we measured out three feet from all corners and marked the ground with orange spray paint. The over-dig is required for two reasons. First, the excavator will know exactly where to dig. Second, it will provide enough space between between the basement walls and the dirt banks for the installation of drainage tile and the process of water-proofing the outside of the basement walls. 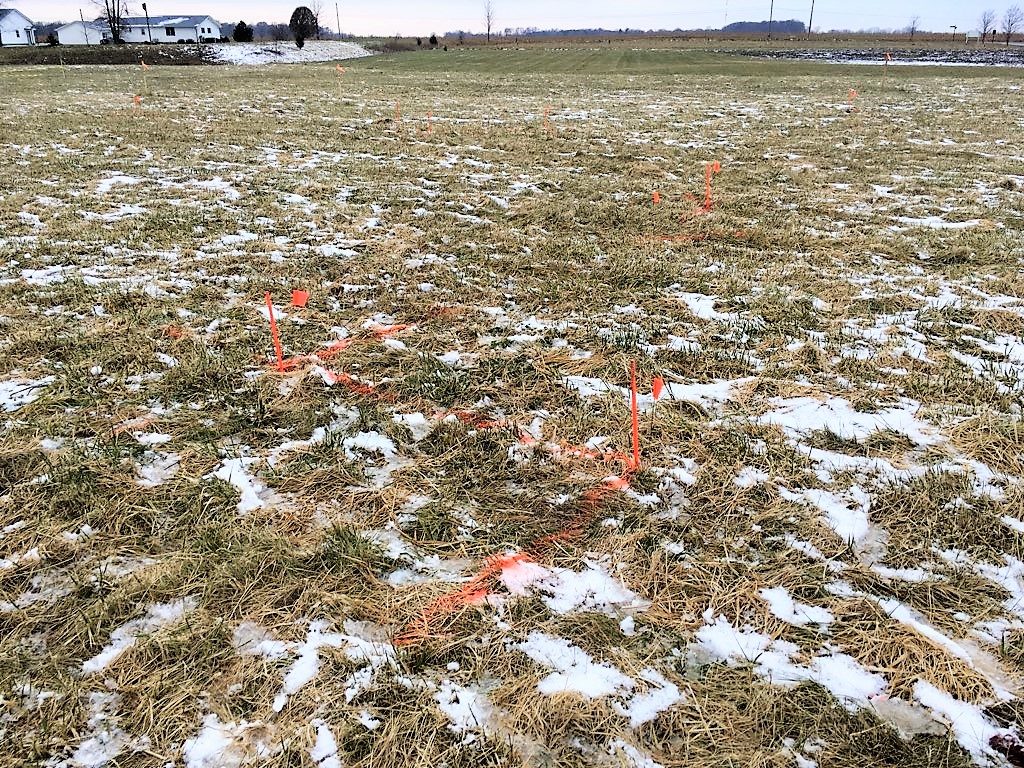 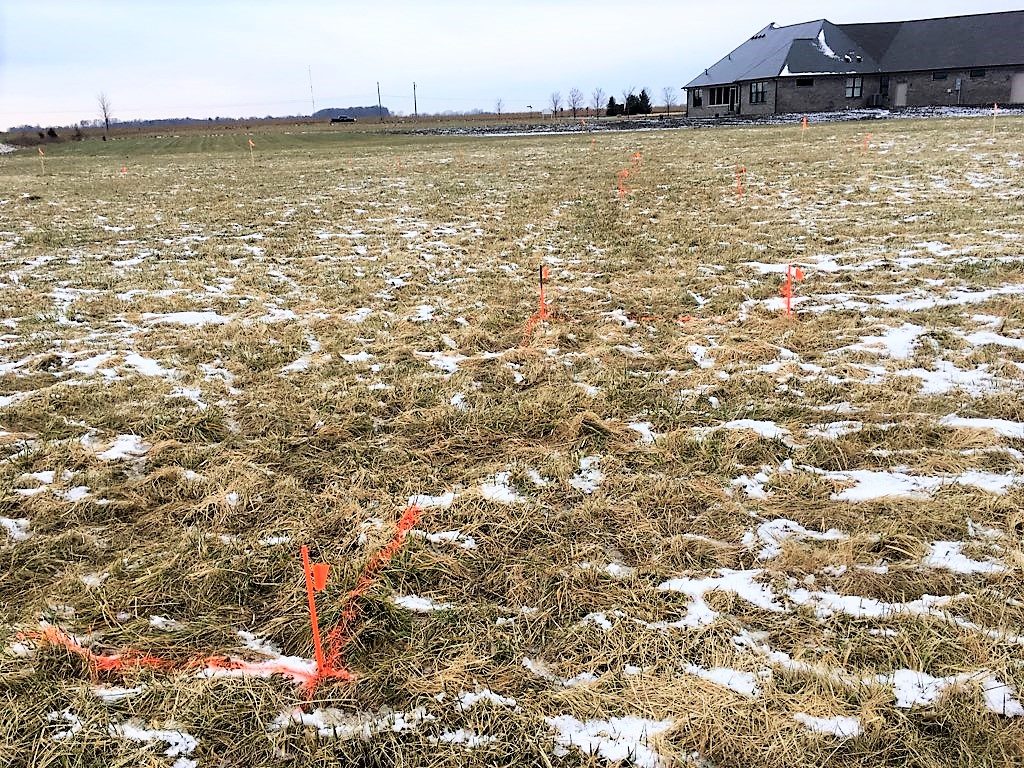 The orange over-dig lines 3′ out from where the basement walls will be.

The plan was for the excavator, Pete, to be out on Tuesday with his heavy equipment to start digging the basement. However, Keith called and Pete was concerned with how wet the lot was and the amount of rain we had recently. Instead, he decided to bring out his mini-excavator and dig a test hole to see how wet things really were. He dug down about 4-5 feet and we hit a significant amount of water. The hole was starting to fill up at a rate of 5-6 inches per hour. 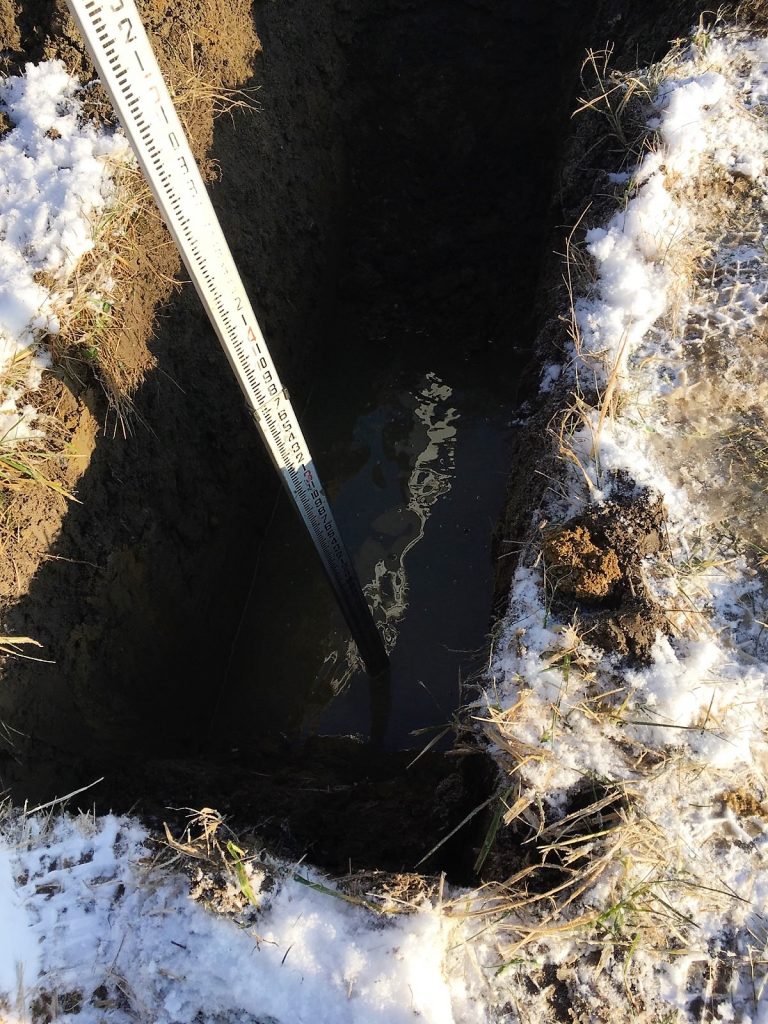 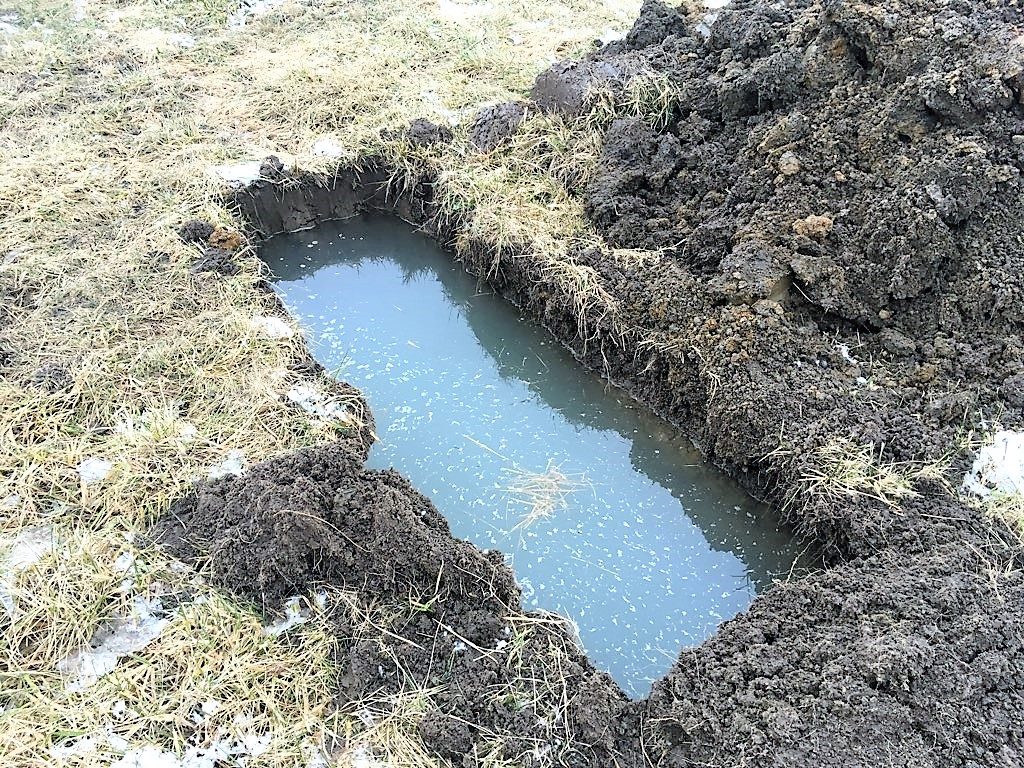 Test hole the next morning.

At this point, we were upset. We knew the water table was high in the area, but didn’t know it was this high. Pete and Keith started discussing ideas on how to address the water issue:

I called Michelle and we talked about our options. We were unwilling to give up the basement as this was one of the reasons we decided to build. I walked to one of the neighbor’s houses that also has a basement. I asked if he had any issues with water and if his sump pump ran non-stop. He said that he had never had any water issues in his basement and his pump only runs frequently when there have been heavy rains. We decided option 3 would be our best choice and we were ready to proceed.

The next morning, Pete and Greg (another worker) arrived with the heavy equipment and started to dig the basement. I’ve not been around many excavators, but he was an artist with this big piece of machinery. 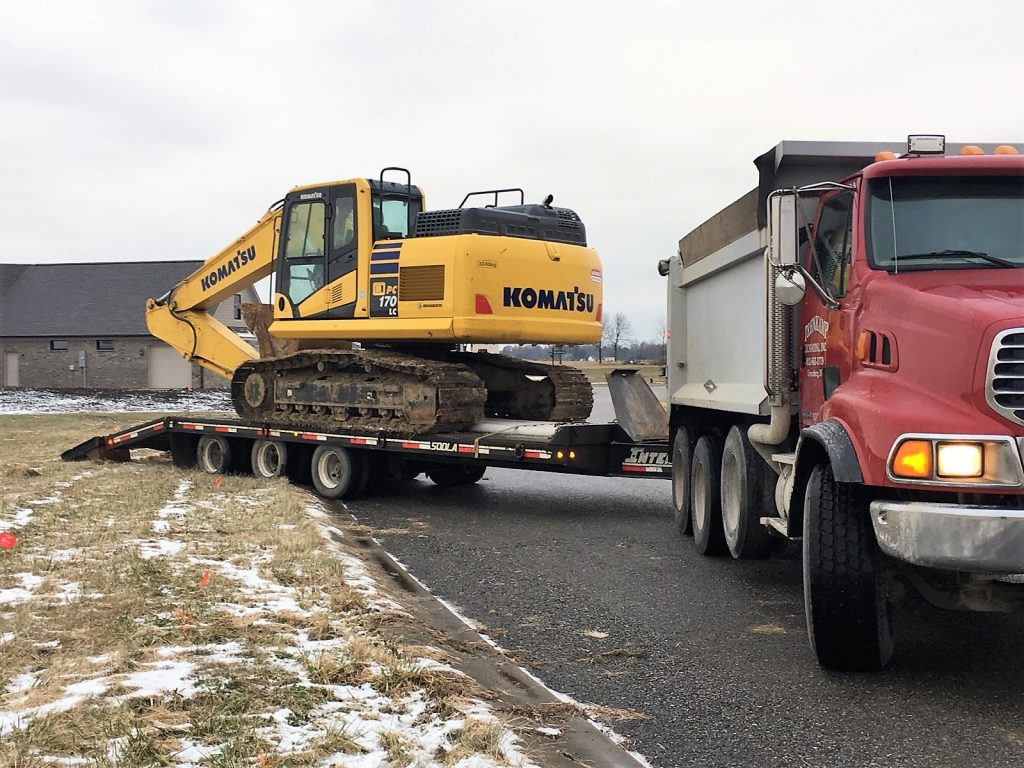 I was nervous to see how wet things would be as he progressed. To our surprise, it wasn’t as bad as we had expected. Pete would use the excavator to dig the dirt from the hole and pile it nearby. Greg would check the depth frequently and used a Bobcat to move the piles of dirt farther from the hole. It took them about 7 hours to dig the entire basement. 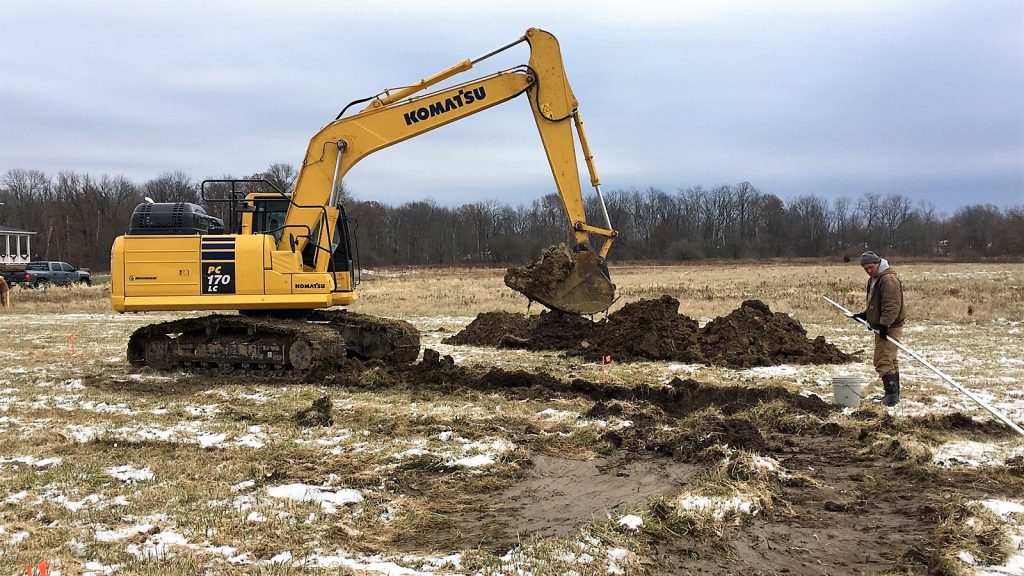 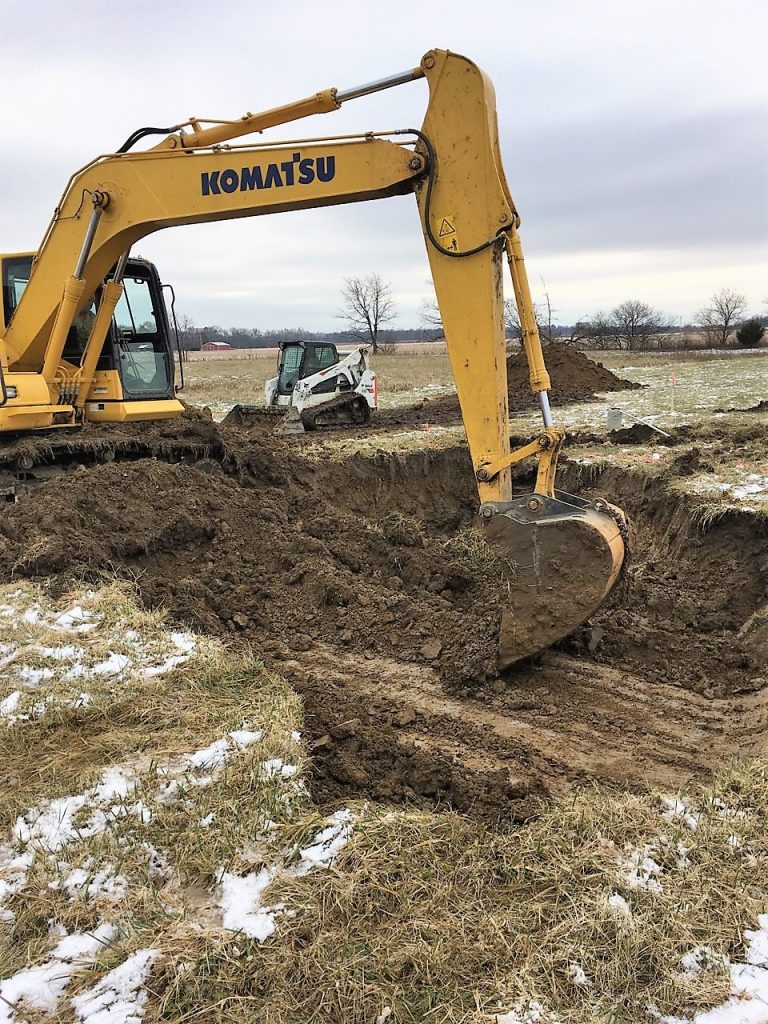 In order to manage the water until drainage tile was installed, Pete dug a deeper pit off of the back corner of the basement. In the hole, Keith placed a 55-gallon barrel with holes poked in the sides. In the barrel, he placed a water pump to pump the water up and away from the hole. We dug small trenches in the basement area so that any water would run to the pump. Everyone was pleased with how we were able to manage the water. 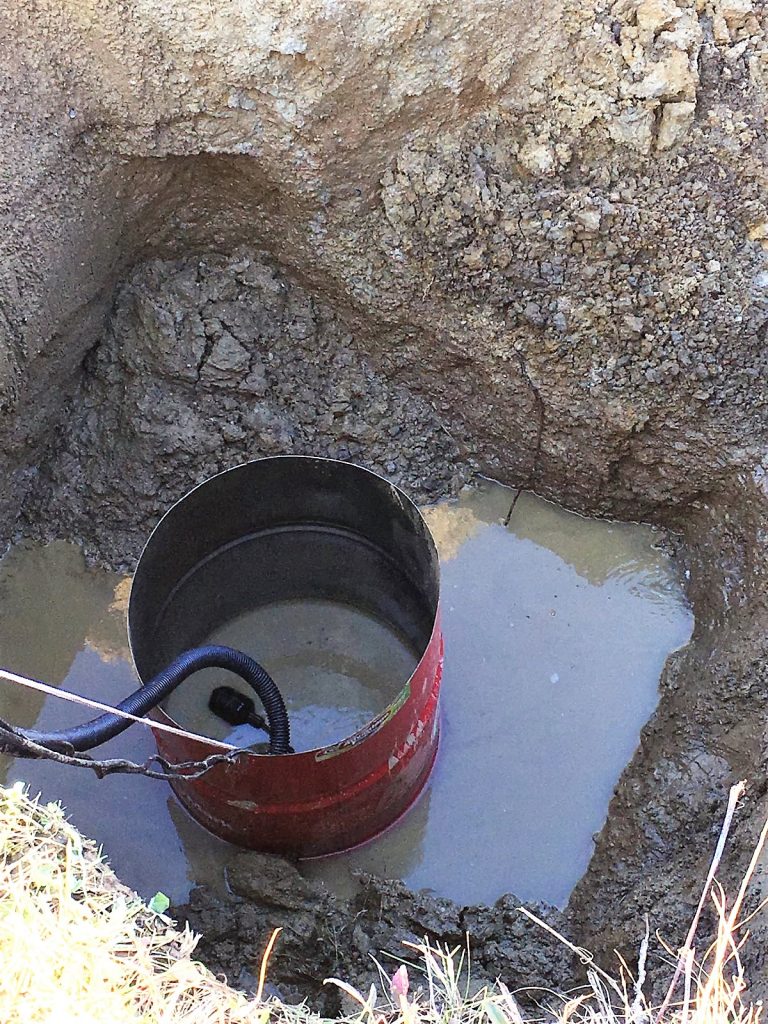 At this point, Keith marked out the driveway for Pete to “cut-in” on Thursday. This is where is pays off to be on site. Keith had marked the driveway parallel with the side property line which made sense to him. However, when I looked at it, I felt like it made the driveway appear it was angling away from the house. I didn’t care if it parallel to the property line. Instead, I wanted it to be square with the house. After a brief discussion, Keith understood my reasoning and re-positioned the driveway stakes to my liking.

It was time for me to go and pick the boys up from school. I had promised them that I’d bring them out to check the progress after school. After picking them up, we returned to the lot. Their level of excitement was really neat to see. Just like for Michelle and I, building was only an idea we had been talking about for months and they couldn’t believe it was finally happening. After putting on some boots, off they went. I told them they needed to stay off all the dirt piles because it was so muddy and they still had school clothes on. What was I thinking?!? Within minutes, the excitement of watching the excavators disappeared and they were off playing in mud. They had a great time over the next hour and were absolutely filthy when finished. They may have had to ride home in their underwear…  I can’t wait to see their levels of excitement throughout this project. 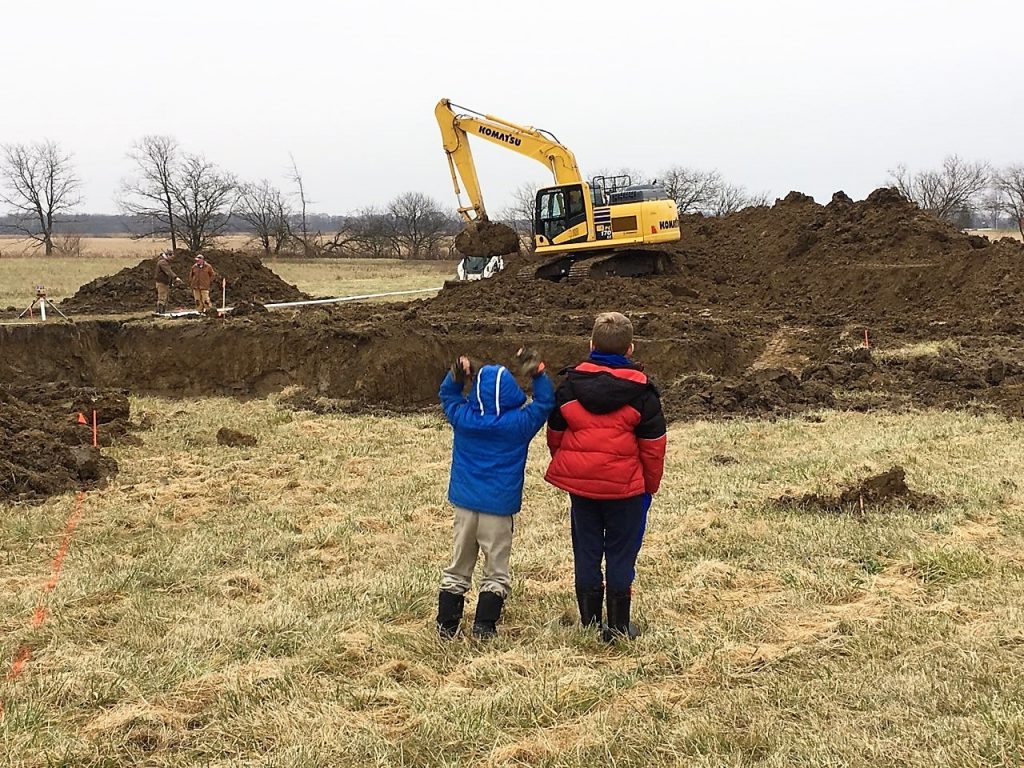 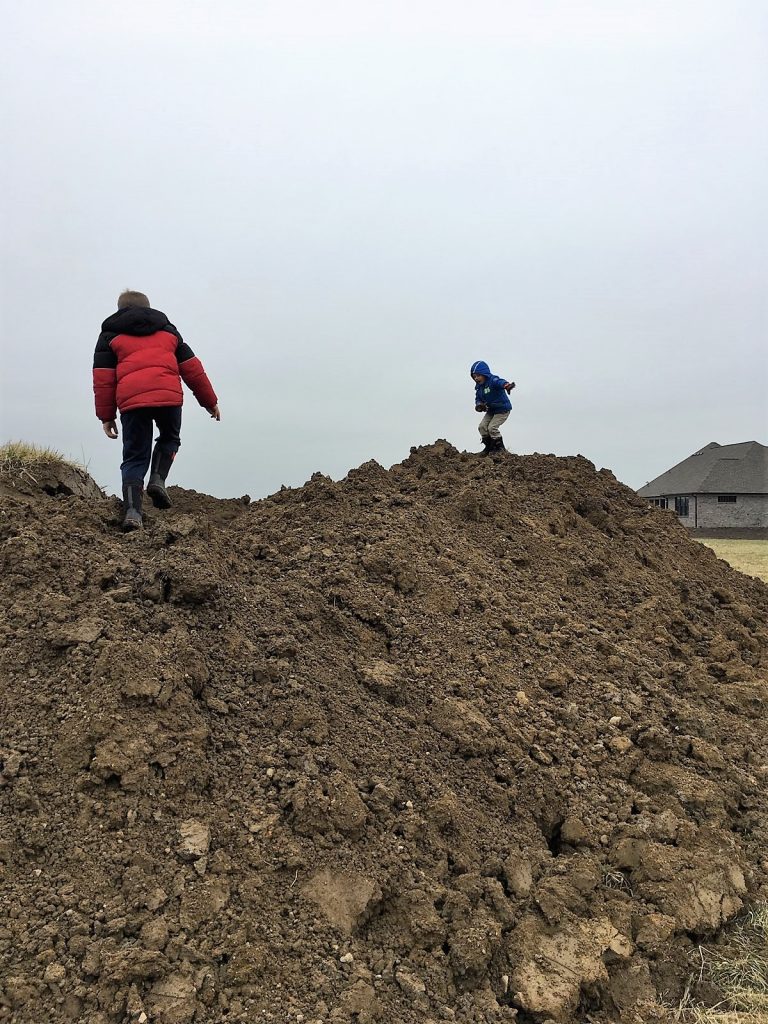 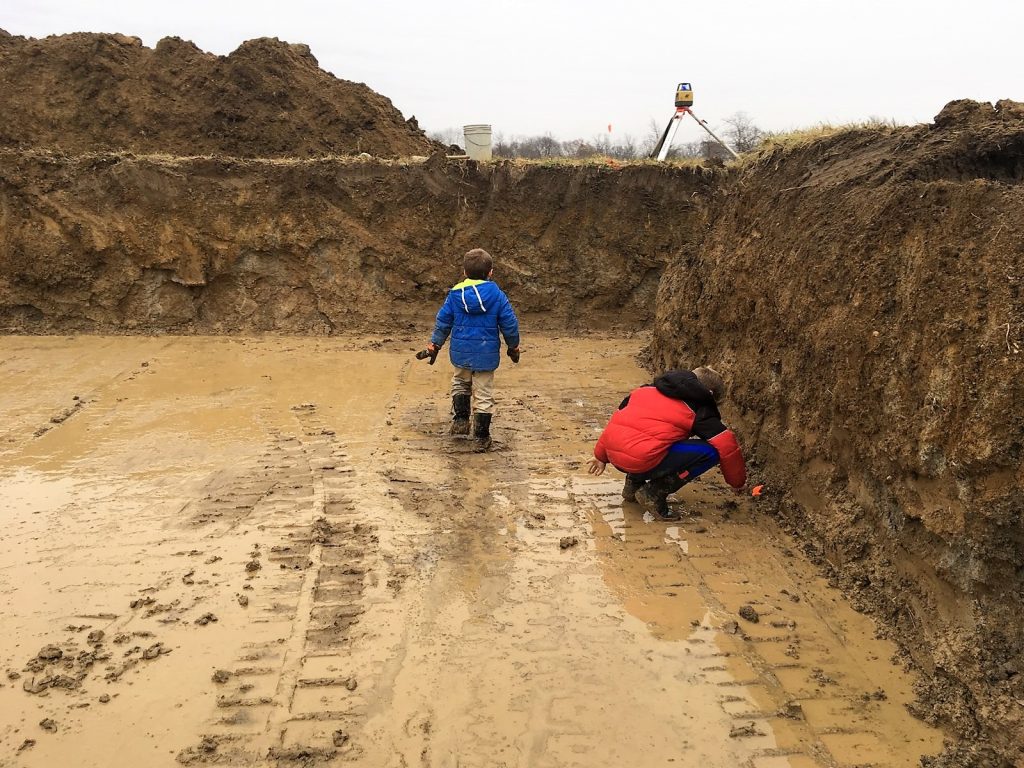