-Carefully analyze proposals and estimates from the subcontractors. If you have multiple quotes for the same trade (concrete, electrical, etc.), make sure the scope of work is the same when comparing prices.

-When possible, avoid pouring concrete from November through March as you will have to pay additional “Winter Costs.”  These additional costs are added because they have to use hot water (versus cold water) in the concrete, add extra concrete mix, add calcium carbonate to speed up the curing process, and cover the poured concrete with thermal blankets to keep it warm during the curing process.  If you are getting an estimate to have work done during these months, check to make sure these additional costs are included on any initial proposals.

After the initial excitement of the basement being dug, we were anxious to proceed with the next steps dealing with the basement. We obviously wanted to see progress and the clock was now ticking on moving this project towards the finish line. When building a house without a construction company that carries all costs until closing, there are additional expenses that start kicking in immediately, such as the interest of your construction loan, the monthly electric bills, and your risk insurance policy. Another reason we were anxious to get things progressing was because I didn’t want the hole for the basement to sit open any longer than necessary. There is always a chance that the sides could cave in and have to be re-dug. I also didn’t want to have to keep stressing about the water and pumps continuing to work. Unfortunately, mother nature didn’t listen to my requests as we got two inches of rain over the weekend. 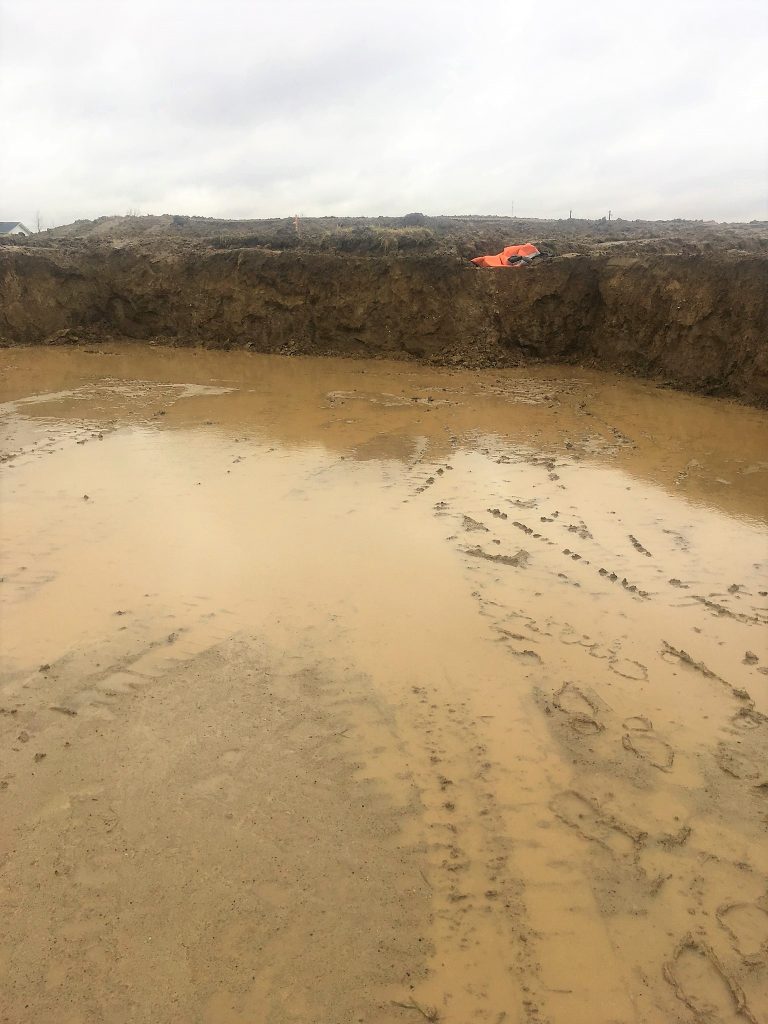 Super wet after 2″ of rain and clogged trenches to prevent water run-off.

The already wet ground, with the additional rainfall, made things a mess. We had dug shallow trenches around the perimeter of the hole to help funnel the water to our pump hole. However, the rain cause some dirt to cave in around the edges, blocking the trenches. I spent time out there on both Saturday and Sunday slinging mud out of the hole to get the water drained as best as possible.

I had received a call from from the contact (Eric) at the concrete company (Company A) on Friday at which time I questioned the timing of the work. He stated that his crews would be able to start the following week; however, there were a few things we needed to discuss… I knew this wasn’t going to be good. Due to the elevation of the house, they would now have to use 4′ knee walls around the garage and porch. I knew this was a possibility in the beginning, so I wasn’t too surprised with this change. I asked Eric to send me a modified pricing sheet reflecting the change. This change would still put the price of the contracted work comparable with another concrete company (Company B) bid that we had received. However, when I received the the updated pricing sheet, there was another additional line item for “Winter Costs” that are required November through March and was not on the initial proposal. When I questioned the “Winter Costs,” Eric explained that it was for the use of hot water (versus the cold water in warm months), additional concrete being added to the mix, calcium carbonate (to make the concrete cure faster), and the use of thermal insulation blankets to keep the freshly poured concrete warm. I understood the purpose of the items after they were explained, but I was pissed over the fact they weren’t on an initial proposal that was provided to me on October 29th, two days before the charges are required. With this additional $3k+ in expenses, the proposal that we received from Company B was now actually cheaper. We checked with Company B after receiving this surprise and they were still 2-3 weeks out on there schedule. There was no way we could leave the basement hole open this long, so we were forced to proceed with Company A. The most frustrating part is that I was now having to pay additional $$ for all of the earlier delays by the drafter, subcontractors, general contractor, etc. as the concrete was originally supposed to be poured in September/October.

With no choice but to proceed, we gave Company A the green light to get started. On Tuesday, a “pinning guy” was on site. His job was to measure and mark all of the exterior and support walls of the basement, garage, and porches per the dimensions on the blueprints. He had to make sure everything was perfectly “square” so that the footers could be formed and poured in the correct locations. 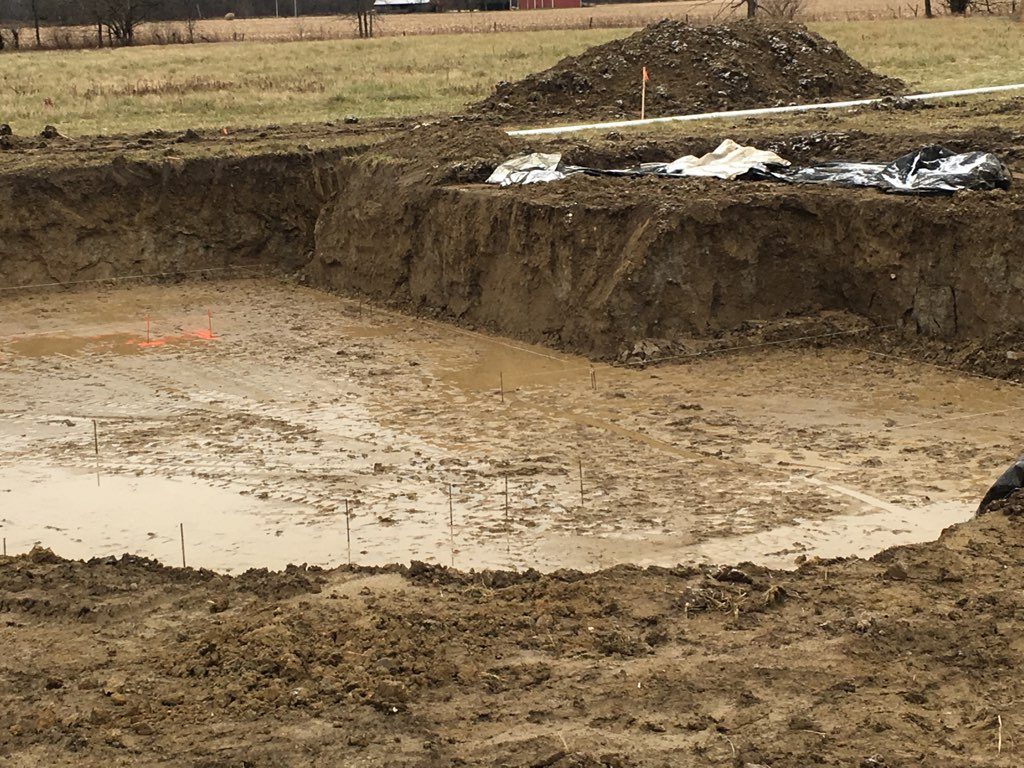 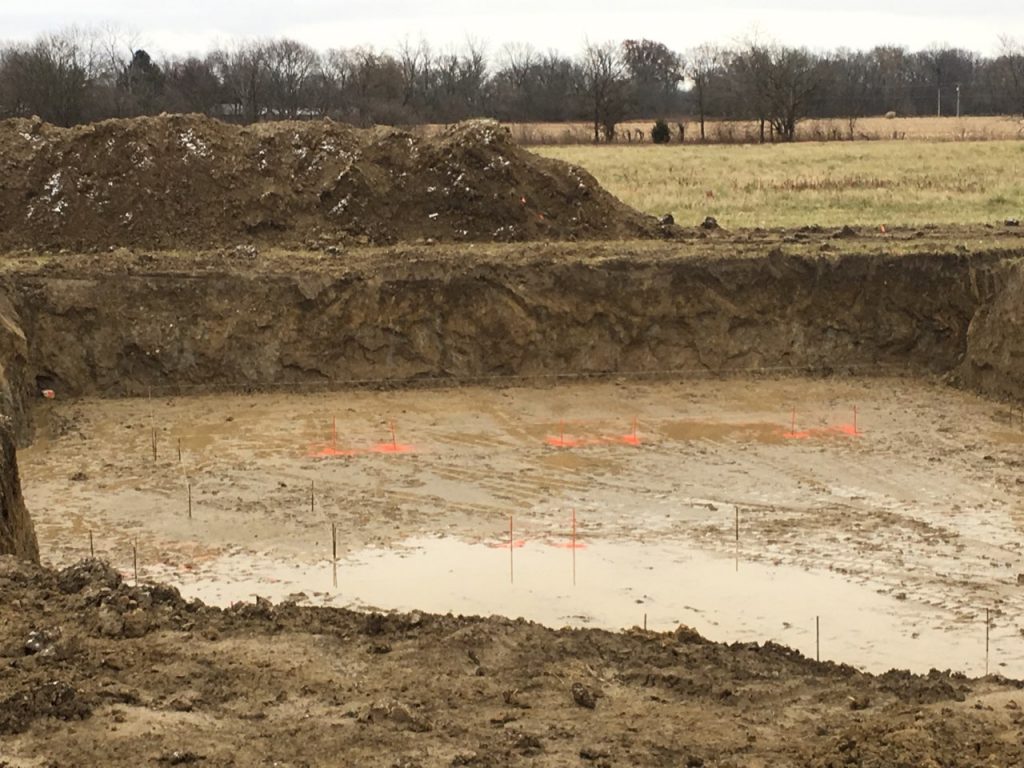 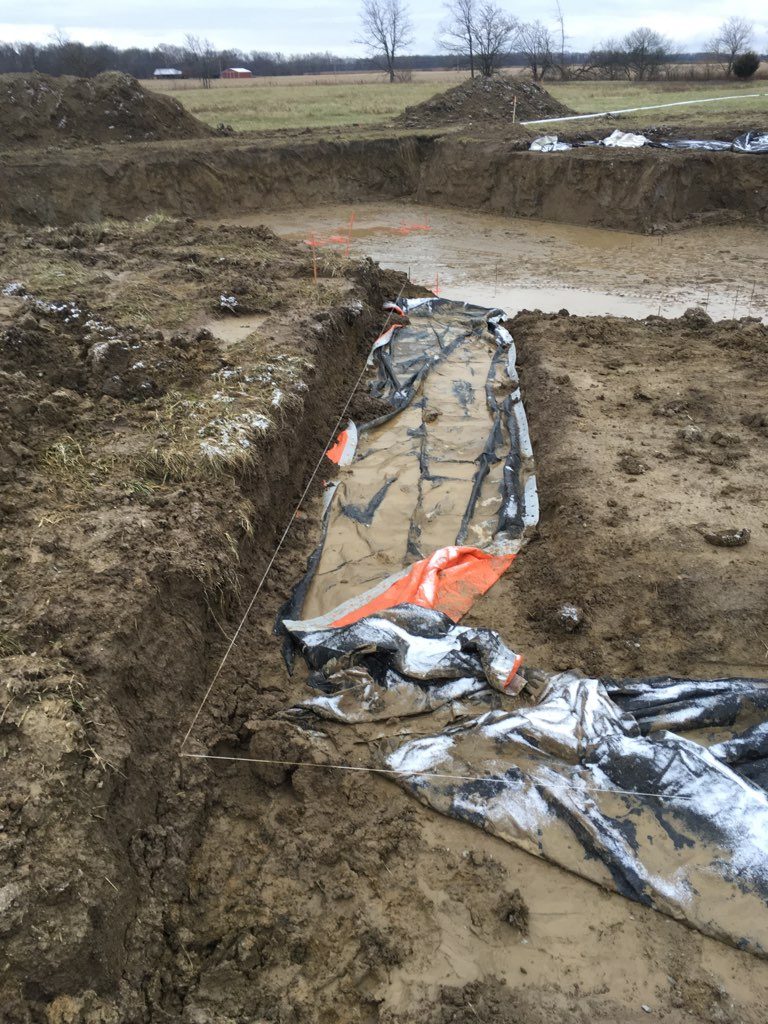 Garage footers with thermal blankets warming the area of the pour.

On Wednesday, the footer crew was on site. They used the pins and string from the previous day to start placing their forms. They placed the outside forms 8 inches outside of the pinned/stringed location. I learned that the footers would be 24” wide since the basement walls would be 8” thick and the footers needed to extend 8” beyond the wall on both sides. 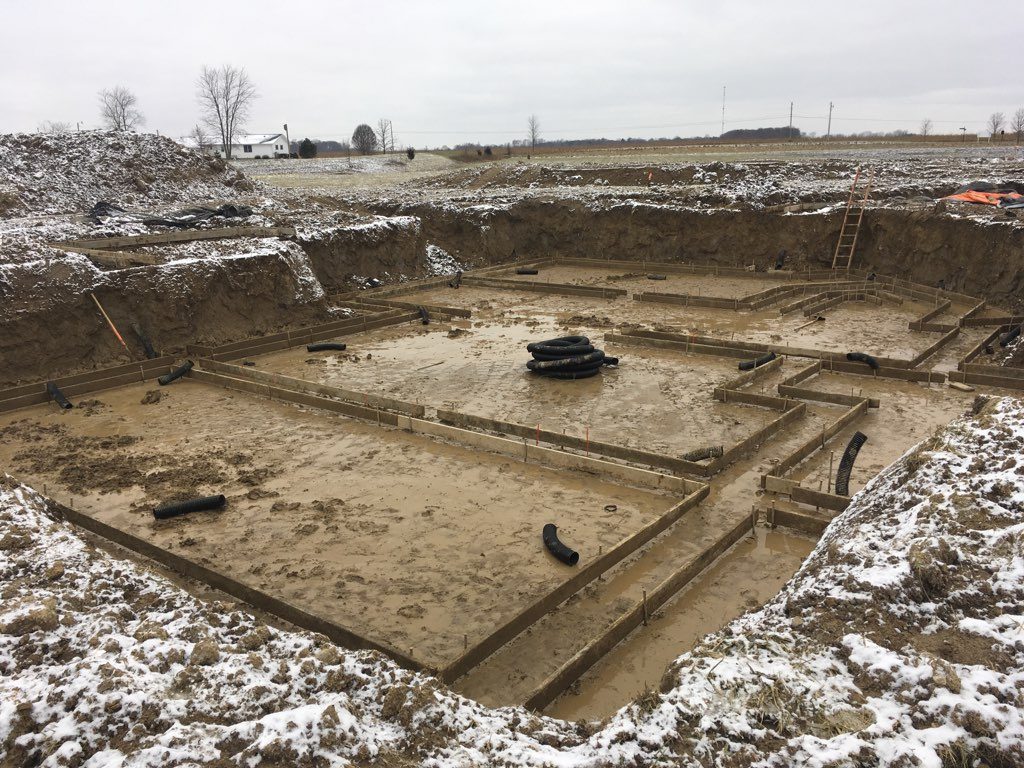 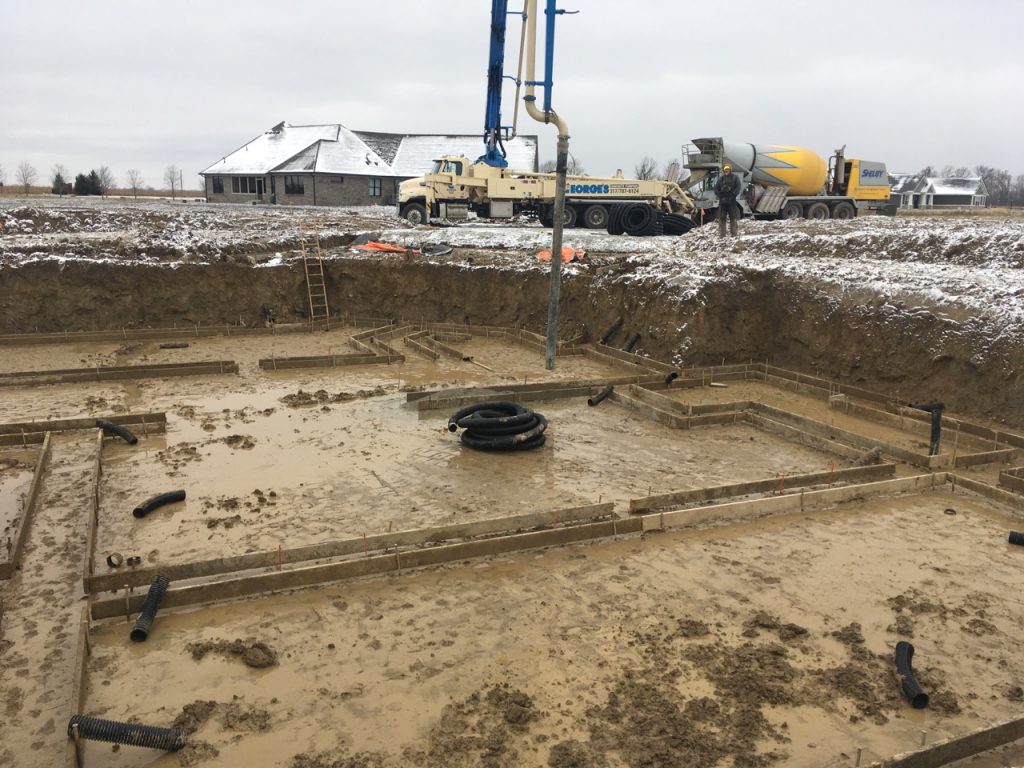 I  picked up the boys from school and came back out on site when the concrete was about to be poured. This was interesting to watch for sure. Since it was so wet around the hole, there was no way the concrete trucks would be able to shoot concrete directly into the forms. Therefore, a pumper truck had to be used. The pumper truck was parked in the driveway and the concrete trucks would pour the concrete directly into the pumper truck’s hopper. The pumper was then controlled by a remote from the operator who was standing away from the truck. With his controls, he was able to guide the arm of the truck to the exact location of the workers. One worker would guide the concrete into the forms, another would trial the top to get it smooth, and another was placing drainage tile sleeves in the concrete where needed. One of the workers was also installing the rounded rebar pieces into the top of the footers. This is how the walls will be tied to the footers. Within 45 minutes, all of the concrete had been pumped into the footer forms. 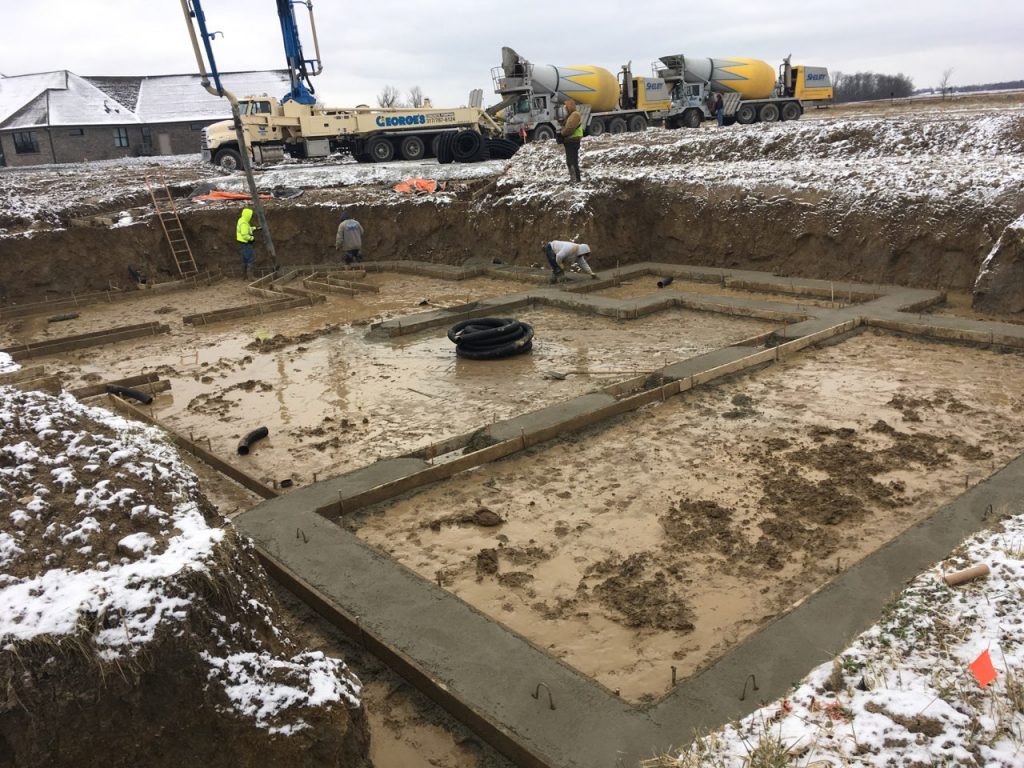 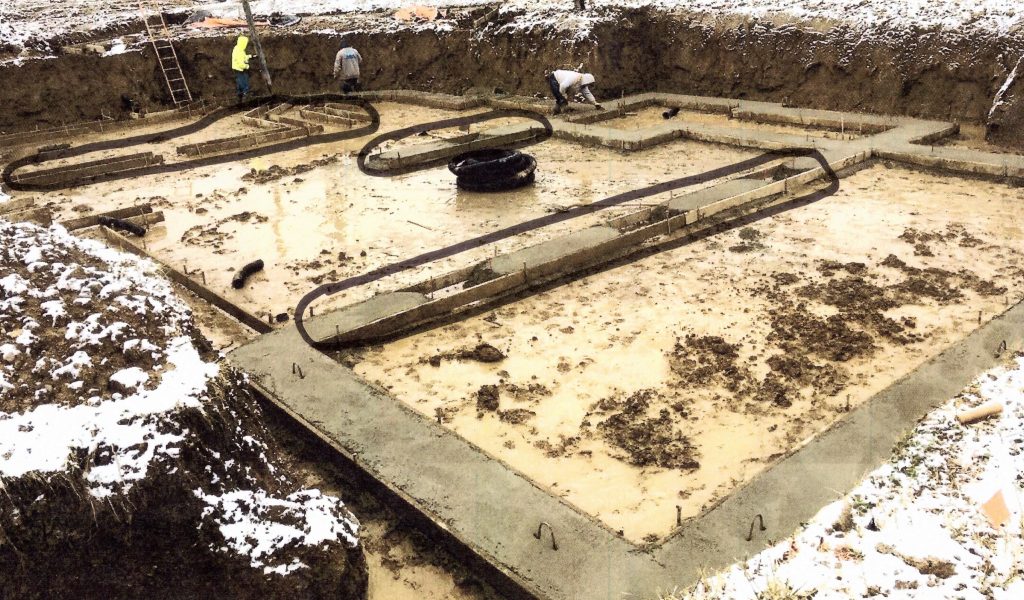 Circled areas are footers that will be under the floor to support the stairway and major support walls for the house.

After the footers were poured and covered with thermal blankets, the workers headed to their truck to warm up. After two hours, they were ready to wreck the forms. It was unbelievable to me that the concrete set up this quickly. Next, the workers laid the drainage tile on the inside and outside of the footers. The interior and exterior tile is joined together in a few different locations through the sleeves in the concrete. These tiles will be tied into both the exterior reservoir and the back-up sump pit in the basement. I didn’t get a picture of the tile fully installed as they finished after dark. 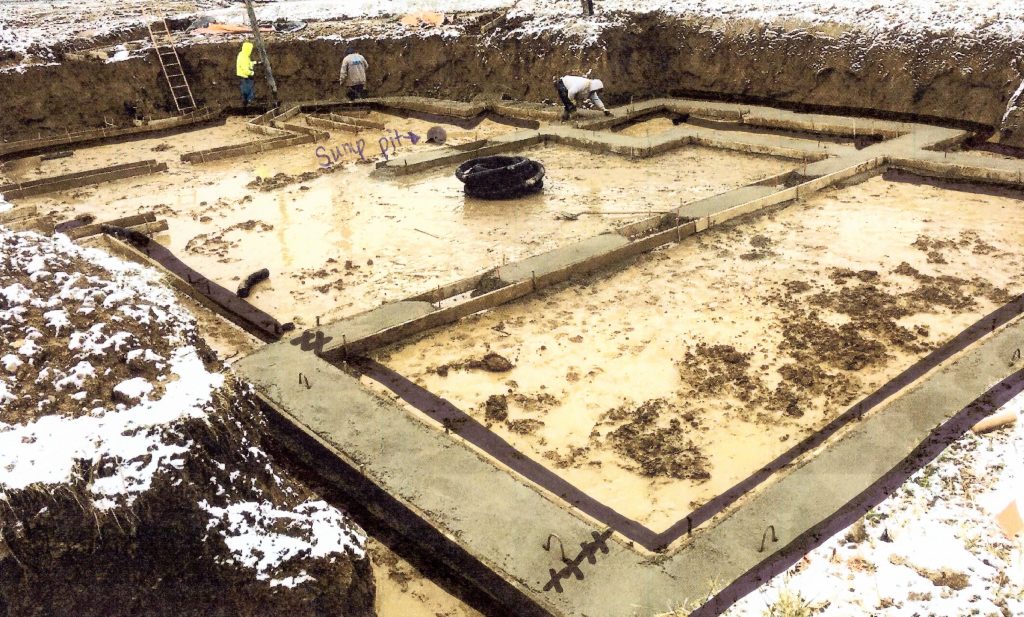 The dark lines show the location of the interior and exterior drainage tile.  The XX show where there are sleeves in the footers to tie the different tiles together.

The next steps will be the installation of stone inside the basement and outside of the footers to cover the drainage tile and the forming/pouring of the basement walls.