#8 – Plan Revisions with Cost in Mind

Plan Revisions with Cost in Mind

“Coming up with a way to fix mistakes challenges your critical thinking skills. Often you end up with something better than what you planned on in the first place.”

-Identify the home features that are required for functionality and that are “must haves.” Then, talk with your contractor to see if there is a way to get these features but in a cheaper way. Have this conversation early in the drafting process to save yourself time and money.

-If you are close to your budget, make sure you get the structural features you want, but save other finishes for after closing (whether it’s a month or years) that you can pay for out-of-pocket. For example, get the layout and major features (solid-surface counters, flooring type, etc.) during the build process. Save the lesser finishes, like a backsplash, moldings, specialty paint patterns/finishes, etc. for the weekend projects over the next year or so.

One of the scariest things for us about a new build is the unknown of what the total cost to build will end up being. This early in the process there are some many unknowns that it’s difficult for the contractor to give you an exact price. Yes, the contractor gave us rough estimates when considering plans, but until the plans are finalized by the architect/drafter and the contractor presents us with the itemized contract, we won’t know the exact price (understanding there will still be overages, etc.). Therefore, during the drafting and revision phase, we were focused on getting the layout and exterior features we wanted without getting crazy extravagant. This is where my background knowledge of construction and home features served me well. I will share with you a few structural changes that we made from the initial prints and the reasoning behind them.

First, we wanted to have a Jack-and-Jill bathroom between the boys’ bedrooms. This was originally done without changing the footprint of the home; however, we wanted the tub and toilet to be in a “water closet” by itself for obvious reasons. 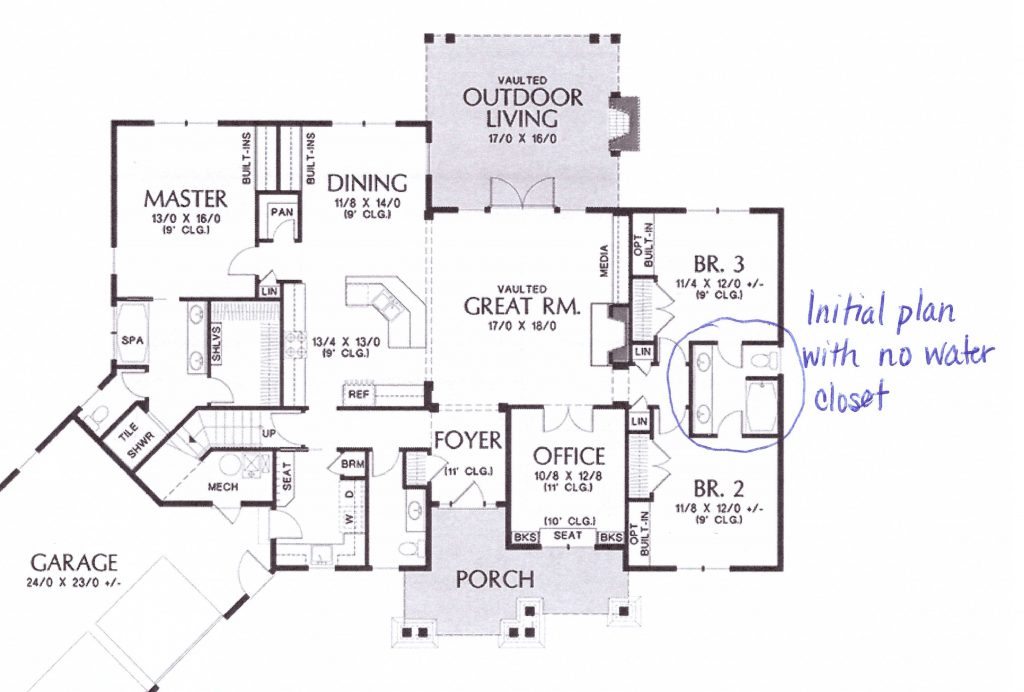 Original plan with Jack-and-Jill bathroom without water closet.  Plan will be reversed.

In order to do this, the drafter bumped the bathroom out two feet on the exterior of the house. While this looked great on prints, I knew it would be costly. Anytime there is a corner (inside or outside) on a house, it means more $$ due to materials in framing, brick/stone, siding, and additional labor. These corners/space also transfer down into your footers and basement walls, which add expense for the same reason. Finally, there is a need for adding framing on the roof with two additional valleys. The simple 2 foot bump-out could cost an additional $5k+. 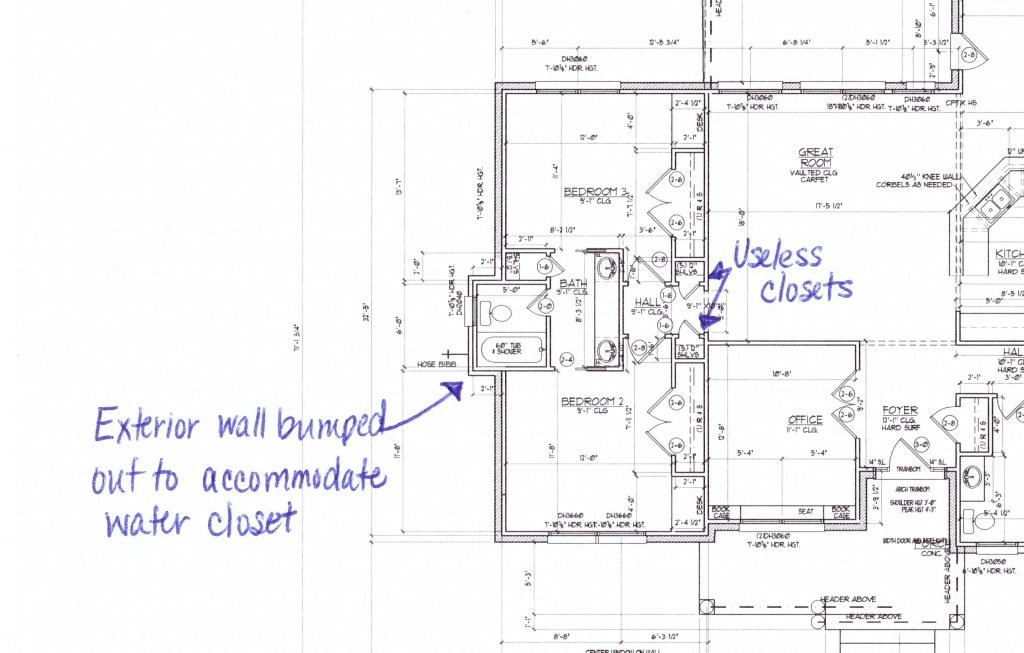 Revised plan with wall bumped out to accommodate water closet.

I then went back to the plans to see how this could be avoided. I really didn’t see the need for the two small linen closets outside the bedrooms. I told the drafter to remove the closets and shift the bedroom doors to accommodate. Next, I had him shift the bedroom closets towards the exterior walls to allow for the door swings. Making these changes allowed us to shift the bathroom two feet inward. We were able to get the bathroom we wanted and save a descent chunk of $$. 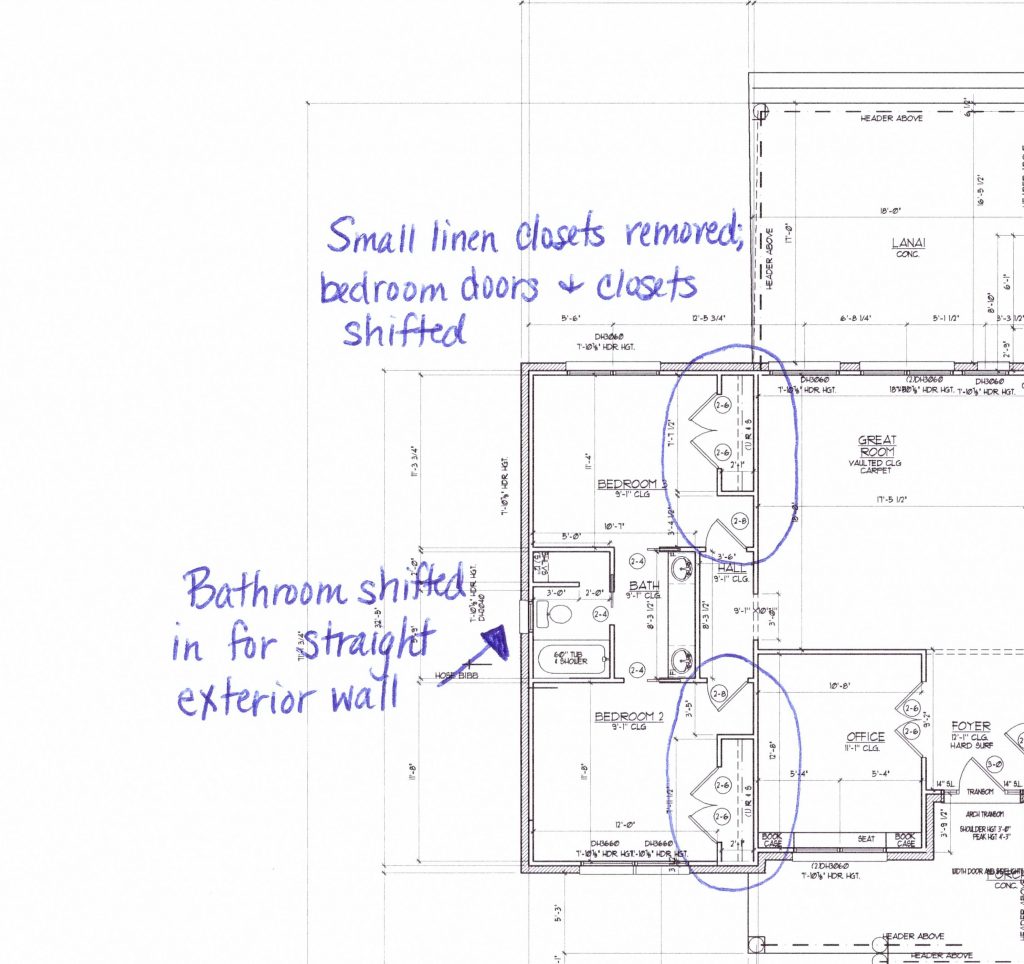 Another reason we liked this plan was because it had a bonus room over the garage. We thought this would be a great space for the boys to hang out without adding much of an additional cost, especially since I planned on finishing the space at a later time. 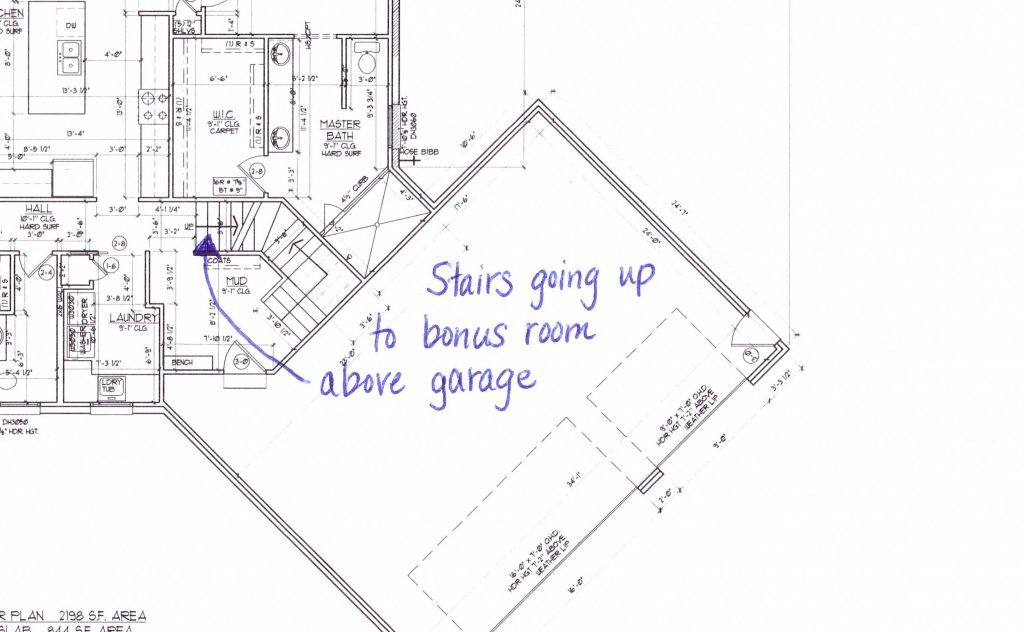 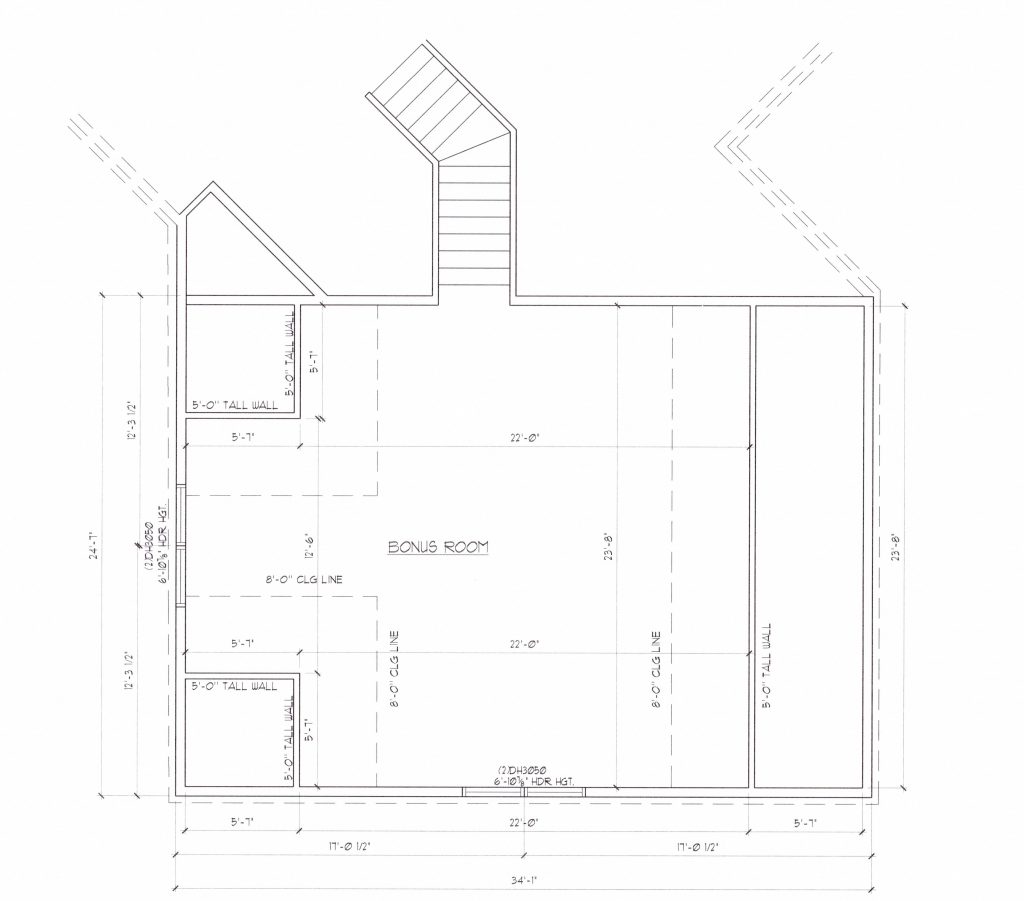 Original plan showing stairway leading up to bonus room above the garage.

However, once I discussed this option with our contractor, Keith, I quickly realized this would not be a “cheap” space. Since we wanted the bonus room to have a gable with a window looking out to the front, he explained that it wouldn’t be a “trussed” bonus room, but would instead have to be “stick-built.” This process would involve him having to use standard floor joists, which would require a beam in the garage ceiling with posts for support. Another issue would be controlling the temperature with the HVAC system for the rest of the house. Keith said typically they install a separate wall-mounted Mitsubishi system that would heat/cool only the bonus room.

After explaining all that this bonus room would entail, Keith approximated the cost of about $13k. This was not something Michelle and I expected and we quickly decided to remove the bonus room from the plans. With the removal of the bonus room, we could not put a hip roof above the garage versus a gable, which was also a cheaper alternative. 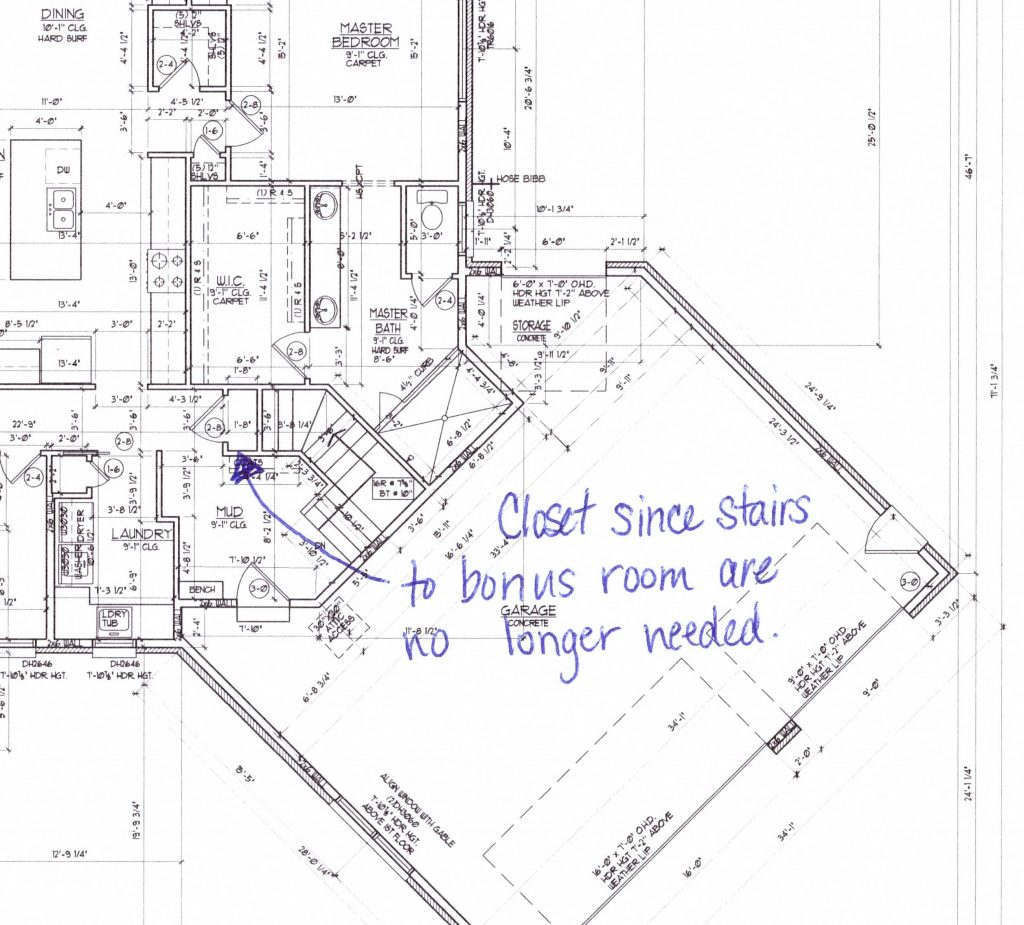 These were the two biggest revisions we made to our plans with cost in mind. I wish we would have met with Keith a few weeks earlier in the process as this could have saved us a few revisions with the drafter and saved a couple weeks in the planning phase. I then submitted our last revisions to the drafter so our plans could be finalized.